The dental office Strathcona Orthondontics came to me with a problem. They needed to enhance their existing print form. The current form needed updates and it was time for some design upgrades.

After analyzing the current print solution and speaking to the staff that used the information in the forms I was able to organize the main questions into two forms: adult patient history and child patient history. Typography was key to the layout of these PDFs. The main challenge was to maintain consistency in the interface since the form would be printed and delivered via the website.

The first version of the form was a PDF fillable form. When the 'Save' button was pressed, the information in the forms was saved to a MySQL database via some backend scripts written in JavaScript and PHP. Staff could then download a 'filled' form for saving to their internal patient management system.

Tracking the number of access attempts to the forms compared to the number of completed forms received by the office was roughly 82%. 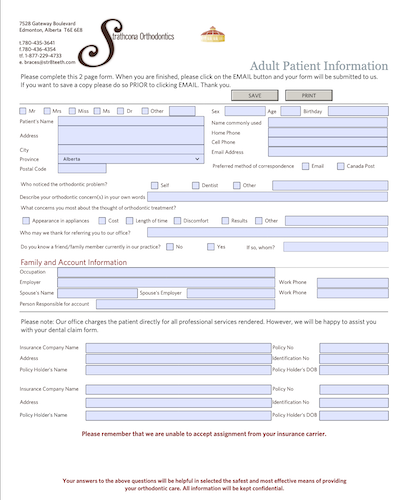 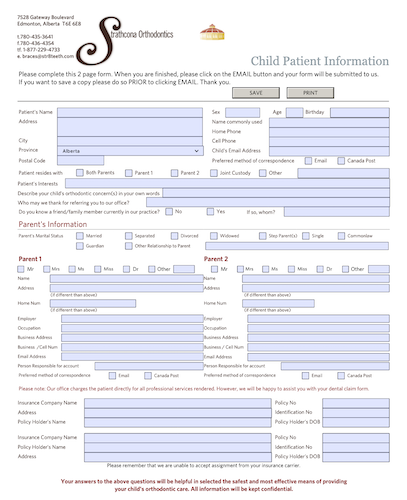 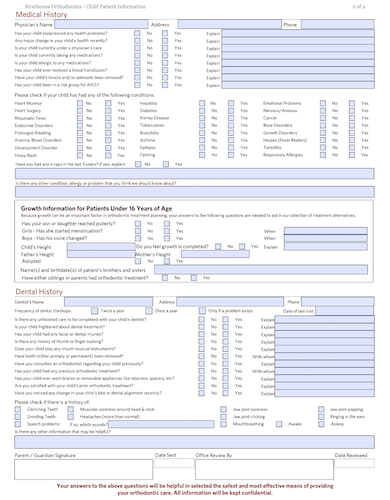 The forms evolved over time.

One evolution arose when browsers included PDF viewers, the fillable part of the form that saved the information to the server via PHP and MySQL code failed to work as effectively. Evaluating the options, we evolved to an SSL encrypted website form.

Using HTML and CSS, I managed to initiate the interface of the previous PDF form. The web form was optimized for print so the office could still offer a printable solution for patients.

By the way, I also designed the logo that you saw in the forms above and a custom website for this dental office.